The Editors Are Not Beyonce 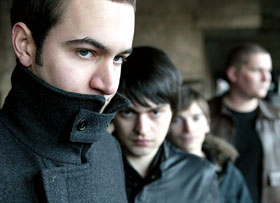 I was all prepared to write a scathing post about the fact that Beyonce is still #1 on the Billboard Hot 100 this week, but I realized that a.) The last three posts were way too bitchy, and b.) Beyonce ain't gettin' any more mentions here. Instead, it should be noted that The Editors are probably the best band to come out of England in years. They recently had a Top 10 single in the U.K. with "Munich" (after it was re-released) - which you can download from the U.S. iTunes store. I picked up the Australian copy of their album The Back Room last night, and I've probably played it about six times now. A lot of comparisons to Interpol have been thrown at the band, but after listening to the whole album, those comparisons all fade away. The Back Room won't be released here 'til March 21st. They're also mounting a North American tour this spring. Check out The Editors' official site for more info. And watch the video for "Munich" here: