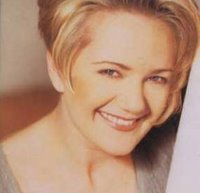 Last week we brought you part one of a special interview with Chart Rigger's favorite floor-filler, Brit beauty Nicki French. It was good stuff, so make sure to go back and check it out if you haven't already.

Now, while it was announced today that the Diva DJs Vs. Nicki French re-release of "Total Eclipse Of The Heart" has been pushed back a week due to an issue with the pressing, this just gives us a reason to stretch the interview out over three weeks, instead of two! Make sure you pre-order your copy of "Total Eclipse Of The Heart" here, and check back next week for outtakes from the interview.

CHART RIGGER: So, what's the deal with Stock, Aitken and Waterman? Are those three really back working together again?
NICKI FRENCH: No one's quite sure. They sort of got back together for a lot of TV interviews when the greatest hits CD was out, but I'm not sure. I know [Mike's] working in the studio, but I'm not sure whether it's Mike and Matt and Pete, or whether it's just Mike.

How Guns 'N' Roses Chinese Democracy of them. Overall, did you get on well with Mike and Matt?
I did at the time, definitely. I felt very honored. I mean, God, we all grew up with their music. Suddenly you're meeting them! And then suddenly you're talking football with them, or talking about cooking or silly things, and you realize, Oh my God, I'm in their zone now! I'm in their little clique. It's a lovely feeling. When Mike first heard Engergise's version of "Total Eclipse," I'd heard that he liked it and wanted to do something about it. I just assumed he'd find a different singer. Then suddenly I'm invited in to meet him. From that moment on it was a bit of a dream, really. And then to know that I was the most successful artist with him under Love This Records was lovely. I always felt quite proud of that. So, I always enjoyed working with them. Always got on well with Mike and Matt. I've still never actually spoken to Pete. Their partnership had all ceased by the time Mike had started Love This Records.

Yeah, Mike started Love This about a year after the SAW split, right?
Exactly. And at that time, it was quite acrimonious, I think, so I wasn't likely to meet him! [Laughs]

Simon Cowell would have been putting Mike and Matt together with Robson and Jerome around then. Did you ever come into his orbit?
I never actually did meet him. And yet the weird thing is, five years later when I did Eurovision, he was supposed to be handling my track ["Don’t Play That Song Again"]. It was signed to RCA Records, or BMG Records, and he was given the job of handling the track. He was going to come to Stockholm to support me, and couldn't at the last moment because Westlife were doing something or another. He passed it to his assistants. But no, I never actually met the man. I'd love to. 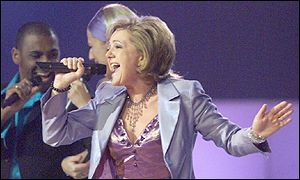 Naughty! You're right! Folks must thing you've changed careers.
[Laughs] Oh, members of my family have spelled it the wrong way before. My mom’s even holding her hand up now! [Laughs] My sister-in-law used to spell it N-i-k-i. That was it.

Sounds like she could do with going back to school. Hey, speaking of which, you do some teaching, correct?
Only a little. It's just when I have the time, I like to pass on to the next generation, as it were. It's at a stage school. Because they're taught very classically, very few of them are pop-minded -- but want to be. A lot of them want to try. I'm not teaching them how to use their voice in the correct way with breathing and so on. I leave that to the other teachers. With me, it's more to do with performing on stage and getting through a slot without boring your audience -- putting some light and shade into the song, thinking of the lyrics, you know, think about what you're singing. So it’s all a more down-to-earth teaching as opposed to sitting there and saying, "Right, open your diaphragm, and this, that and the other." But, they seem to enjoy it and it seems to bring results, which is good. I do enjoy it when I can.

Alright, time for the geek fan question (as if the majority of these weren’t already). The b-side to the original "Total Eclipse" single was "Pride And Passion." But that wasn’t included on the U.S. CD single, only the cassette single. Why was that?
It was included on a few foreign ones, but I think because it wasn't a Mike and Matt studio composition -- it was John Springate, who originally got me involved with "Total Eclipse." He had written it. I recorded it about four years before, and we just thought, Ooh, that'll be a nice little extra track.

It's a really great song that unfortunately had to be later acquired on this end by, uh, less conventional methods, since I’d only had it on cassette.
It is a good one! I had a really bad throat at the time I sang it, so you can hear a bit of huskiness in there. [Laughs]

Well, Nicki, thanks so much for the chat.
Absolutely, no problem at all!

That first album was definitely a big part of the soundtrack of my youth, so thanks for that, as well.
Oh, thank you! Gosh, you've made my evening.

You take care.
Alright, matey. Thanks a lot!

Check back next week for some outtakes and overall fun jazz from the interview.