Christ Daughtry, voted off American Idol last season before making it to the finale, has far outsold winners Katharine McPhee and Taylor Hicks. 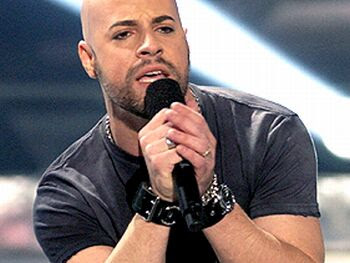 His album with his new band, Daughtry has so far moved close to two million copies, while the single "It's Not Over" [Video] peaked at U.S. #4. But, golly, does he ever come off as tangy in the latest issue of Entertainment Weekly (the article aptly titled "The Anti-Idol"). You'd think he had just been the subject of a Chart Rigger banterview or something!

Here are some excerpts:

On a Wednesday in late January, the chrome-domed singer is playing a lunchtime set at the Children's Hospital of New York-Presbyterian...Frail kids in wheelchairs and teenagers tethered to IVs eagerly await this glimmer of celebrity in a sunny two-story atrium. 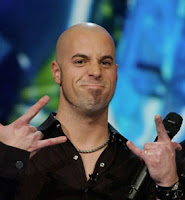 When Daughtry arrives, however, he doesn't seem in a charitable mood. First he cancels the proposed Q&A session.

When a hospital administrator introduces him as "Chris from American Idol," the tightly wound singer snaps. He turns discreetly to a member of his entourage and whispers, "Are they even going to mention the album? Are they going to talk about the band? It's just Idol." [Chart Rigger: You know, so the 50 kids in wheelchairs and on IVs can rush out and buy the CD.]

Daughtry went into his first meeting with Clive Davis, who runs BMG Music Label Group and oversees the label side of the Idol franchise, determined to get his way. And after performing an original tune in the mogul's office...he did.

Thought Daughtry talks a lot about breaking the mold, the 12-song CD is as calculated as a Britney Spears album. A savvy rock producer was hired, along with proven songwriters like former Evanescence guitarist Ben Moody and hit-maker Dr. Luke, who helped pen Kelly Clarkson's "Since U Been Gone."

Daughtry himself admits that being away from home has brought stress to his marriage. "I'm not there to help her with anything," he says... The commitment that brings him far more anxiety, however, is the one he made to Idol."It can be frustrating...Well, I'm the one who decided to go on the show, so you can't be too upset about it."

A sold-out midweek show at Los Angeles' El Rey is filled with moms in bedazzled peasant shirts and clumps of kids sipping Shirley Temples...the room erupts in shrieks. A woman screams repeatedly, "You're so hot, Chris!"

It should be a triumphant coronation of a rock star, but during the entire 50-minute set, Daughtry doesn't smile once.

Jeez, if he thinks that's bad, wait till Clive Davis and Co. turn their attention to launching Leona Lewis in the States, Daughtry's next single stiffs at radio and he's left doing the shopping mall circuit with Kellie Pickler.

New poll up now in the sidebar.