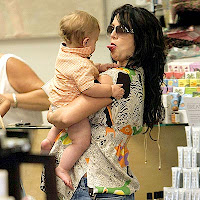 The Billboard chart this week sucks more than Leona Lewis probably did to get to where she's at, so let's instead talk about how great Britney Spears' Blackout, is! Now, I know...trust me, when Entertainment Weekly gave it a B+, I was like, Wha'? This can't be! But rest assured, this is the most consistent album of her career. I think folks can agree that Britney's always been good for making a record full of singles, maybe one or two decent album tracks and then a bunch of filler ("E-mail My Heart" or "That's Where You Take Me" anyone?)

But how this broad managed find the time to stumble into a studio this year to record 12 songs -- and not-bad ones at that -- is beyond me. First off, after hearing "2 Hearts," Kylie Minogue had better have something as good as Britney's "Heaven On Earth" on her new one. It sounds like some galloping electro jam Bobby "O" left on the shelf for the last 25 years.

The second best track is "Hot As Ice." It's an example of how, even when you think she's about to serve up some mediocre R&B number, a really catchy pop hook or middle eight comes out of nowhere in these songs.

"Radar" starts out very Madonna-esque, circa "Music." It's kind of distracting though, when B. Spears repeatedly pronounces radar like raider (she says so much in the three plus minutes that you can't help laughing). "Break The Ice" is pretty rad, too. (Hmmm, what's with the ice theme?)

Look, I know. I realize it's an uphill battle defending Britney Spears' artistic merit. All I can say is that the whole time listening, the names Madonna and Kylie kept popping into my head. Mostly because I wish those two Grande Dames would make something this sweet again.

Blackout is truly one of the great pop albums of 2007. It's like Britney finally gave up aiming for credibility and just had fun, and she's never been better than when she lets the producers take control and cover up her vocal shortcomings with a dazzling array of effects.

Recommended: If you're mildly curious, download "Heaven On Earth." You might find yourself forgiving Her Trainwreckness a little bit.