Robyn: "My Hair Has Always Been Fly" 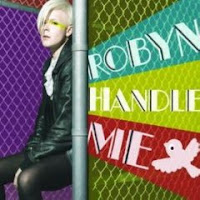 Robyn's "Handle Me" single will be released this Monday in the U.K., and Metro ran a naughty interview with her yesterday wherein she says the most ridiculous promotional thing she's done was a radio gig with the Spice Girls when her first album came out in Britain 10 years ago ("I didn't dig any of them."), and that "my hair has always been fly. I've never had any hair problems."

Sexy! I've actually had problems with Robyn's hair, though -- she looks too much like the first boy who ever handled me. Anyway, here's Robyn getting feisty when asked about Britney Spears (and what lame question):

You worked with producer Max Martin. So did Britney Spears. What advice would you give her?
None. I have no opinions about her life. It’s ignorant to think that just because we had one thing in common, we’d be similar people. People deal with their lives in different ways. It could happen to anybody. People shave their hair off every day but when she does it, it gets in the news. It’s really nothing special.