Remember Z-grade hookers, Danity Kane? Probably not... they had one hit ("Show Stopper") two years ago, then skittered away like a caterpussy. 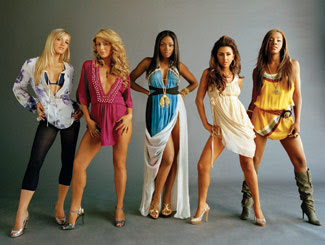 But the cash must be gone, so now Sean "Puff Diddly" Combs is trotting out the 10-legged ho machine for yet another season of Making The Band -- from whence they were created, in season 3 -- and this time it's sure to be a trashfest.

Come to think of it, they were first on that show five years ago. They've all gotta be about 40 by now. Anyway, the low-rent concept this time is that Danity Kane have to live in a house with the last boy band who won the show and some guy named Donnie, while they all record their albums.

Naturally, the music doesn't matter -- it's all about who's gonna hook up and do sex in the house. One would assume Puff Daddy already screwed all 11 of them -- you know, to make sure they were "in tune."

At any rate, Danity Kane's new single, "Damaged", will be made available on iTunes tomorrow. It's actually a pretty decent electro-pop number. A full album is expected in March. The premiere of Making The Band 4 airs tonight on MTV at 10 p.m.