Look Out, Madge And Mariah: This Spring's Log Jam Of Diva Releases Just Got A Lot Sexier

That's right! Look which disco hooker's got an album full of sexy jams out on May 20 -- Donna Summer. And she's got rainbow hair. 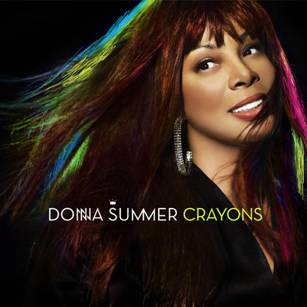 Sure, they Photoshopped about 3,000 years off Donna's mug here, but who cares -- her album is called Crayons!

In the press release, Donna says, "My dream is that when people hear the music it will remind them of their youth, their childhood and the joy and wonderment they felt exploring their first pack of Crayons.” Baby, my dream is that when I hear this trash, I'll put on my stiletto heels, snort a line of glitter and start doing gazelle kicks up and down the sidewalk outside!

The best part is that Donna worked with Greg Kurstin, who co-wrote and produced Kylie Minogue's "Wow" and "No More Rain," Lily Allen's "Alfie" and All Saints' "Rocksteady."