The Killers: Not So Hot On 'SNL' 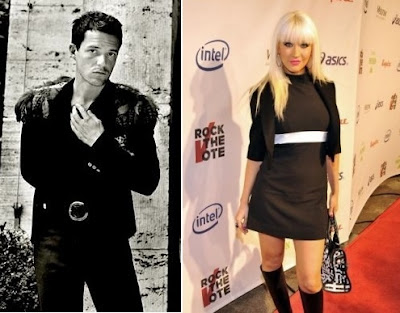 Walking almost a mile back to my hotel room after losing 20 bucks on the penny slots in Vegas on Saturday—at the same casino Sheena Easton performs at nightly—I was looking forward to The Killers' performances on Saturday Night Live as a bit of a sobering pick-me-up.

But backtracking a bit, the band's "Human" was added to iTunes last week, and has faced some stiff competition from a slew of new releases: Christina Aguilera's "Keeps Gettin' Better," Nickelback's "Gotta Be Somebody" and David Cook's "Light On" to name a few—all of which have sold better, but are now dropping off while "Human" has steadily remained at #11 on iTunes throughout the week.

Anyway, back to SNL, there was Brandon Flowers, with his jacket adorned with what looked like quail feathers attached to his shoulder pads, doing his robotic jittering to "Human" and "Spaceman." Someone's still clearly in full-on Joy Division mode. And drummer Ronnie Vannucci is looking more and more like Ron Jeremy with each album.

But they were just alright. I think the big problem with this album might be that the songs are so overproduced and dancy that they might not really work well in a live setting. It's kind of like the anti-climax of seeing Britney or Steps perform live.

NBC doesn't have any clips of the Killers' performing on their SNL page, and the network is notoriously Nazi-like about removing clips of their shows from YouTube and other video sites.

But if you didn't watch the show, in my D'luvvly opinion, you weren't really missing much.