Time's Tide Will Smother You 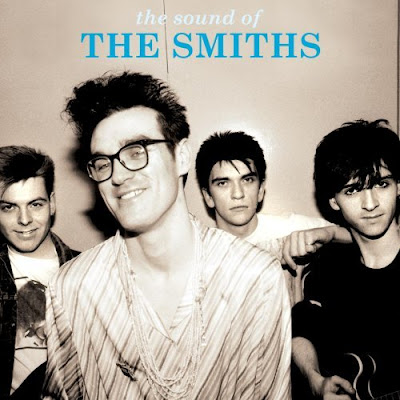 I did a column on Towleroad this week wherein I mentioned caving in and buying the new two-disc "Deluxe" edition Sound Of The Smiths compilation that came out on Tuesday. XOLondon has mentioned this collection a few times.

Even though I kinda/sorta told myself I wasn't going to buy it—since I already own all their stuff on CD—I caved in anyway. The tracks were remastered by Johnny Marr, plus I had never heard the B-sides "Jeane" and "Wonderful Woman" before. iTunes also has "The Draize Train" as a bonus track.

Morrissey is said to have had some input (song selection, was it?), though he's not credited inside.

Has anyone else ever lamented how poor the sound levels are on the original albums?

The 28-page booklet inside is exquisite, photo-wise, if not entirely devoid of any liner notes.

In the end, The Smiths will always be:

Driving yesterday listening to the second disc, I was reminded how devastating "Back To The Old House" is:

When you cycled by, Here began all my dreams, The saddest thing I'd ever seen

And you never knew how much I really liked you, Because I never even told you, Oh, but I meant to