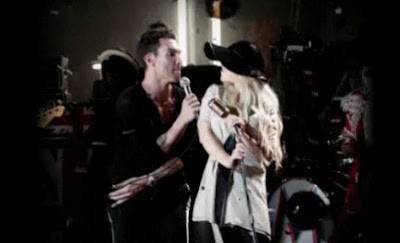 I heard Maroon 5 and Christina Aguilera's "Moves Like Jagger" repeatedly on the radio when I was in Italy last month. The song was a Top 10 hit there, and I guess it was here, too. But it was one of those ones that debuted high and quickly dropped like a stone down the chart.

Anyway, a month-and-a-half later, Shellback and Benny Blanco co-production "Moves Like Jagger" miraculously is now the top download at iTunes, and so what better time for the music video to premiere?

The clip is enjoyable enough. It features a pack of Mick Jagger impersonators — mind you, who are all women — auditioning to be in M5's video. Old interview and concert footage of Mick is edited in to show, you know, his moves.

Adam Levine felt the need to remain shirtless for the majority of the clip (I'm kind of over my "he's so sexy" phase after getting to know his personality on The Voice). Eventually, Xtina comes along for her cameo, and I swear Adam wasn't on the same set with her at all when this video was shot. Even in the parts where they look like they're together, you can't see Aguilera's face.

Maybe they hired a Christina impersonator too?